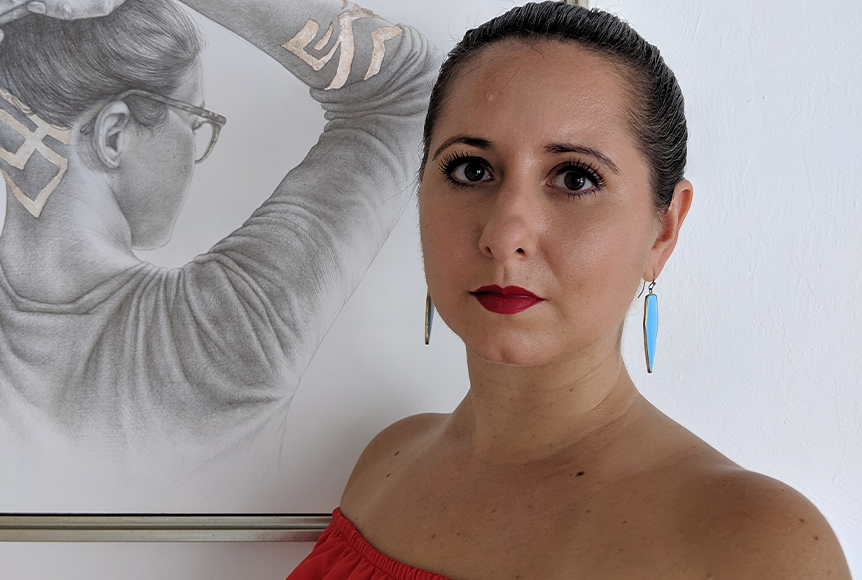 Talismans from the Edge by Lauren Amalia Redding

Talismans from the Edge:

A Review of Journey Into the Unseen, A Solo Show by CarlosMartínez León at MIFA Gallery

A young artist grows up in Venezuela in the 1990s, finds his way to Italy, finds his way to Miami. It’s a journey riddled with passports, a papaleo of staggering proportion that propels his feet across oceans–and the pencils and paper in the backpack he wears has nothing to do with the documents needed to kindle a new life. They aren’t just to sign apartment leases indifferent languages or to scribble the phone numbers of new contacts. He carries pencils and paper to draw.

He recalls playing with Teenage Mutant Ninja Turtles toys as un jovencito, and years later, the characters’ names come back to haunt him. But they aren’t prickly, uninvited ghosts; rather, the names are chiseled into the wall-mounted sculptures lining the Uffizi’s courtyard, chiseled under the feets of the artists whom they depict in stone. He stands in the courtyard.He’s come from Maracaibo to Firenze, to Florencia. He’s searching not just for the ghosts of Raphael, Leonardo, Michelangelo, and Donatello. He’s searching for the fragments they left, the works they breathed and brushed and buffed into life, the artwork that proves that, maybe, they never became ghosts after all. How can you die if you leave your very life behind on earth, exactingly conserved in marble and sanguine?

A journey like Carlos Martínez León’s isn’t traversed often. And like the artists in the Uffizi courtyard, he’s left talismans along his path, strewn across myriad cities and across borders in the form of sketches and studies and stretched canvases, in master copies and mugs of coffee. His most recent series of paintings–those talismans made in a Miami Lakes apartment over the last two years–don’t just map out the scenes and characters he’s encountered in his own external, outwardly-facing day-to-day life. They lay bare something that is, all at once, intensely private and yet universally understood: his internal journey, a psychological and spiritual and intellectual rite of passage, full of the mysteries and temptations and triumphs that Martinez Leon experienced along the way. His way.

Journey Into the Unseen, running at MIFA Gallery in Miami fromMay 19th through June 30th, is Martínez León’s second solo exhibition. Each of its twelve paintings–ranging from single, solitary figures to multiple figures interacting in mysterious, ambiguous spaces–reveals a different scene or moment or character Martínez León encountered along his odyssey. It’s hard to tell if viewing his works, replete with symbols and abstractions and exquisitely-drawn bodies, feels more like retracing his steps or sharing his secrets.

Every human subject in Journey Into the Unseen could personify myriad roles across religion and mythology. Women, for example, could be angels when floating, temptresses when earthbound, or priestesses when standing alone. Old men peer around craggy outcroppings, equal parts impish and prophetic. Even the domes of alien heads make cameos, hinting at science fiction and fantasy; a lone, empty landscape painting even recalls the sort of treacherous mountain pass marched across to Mordor. And halos crown either winged angels, nomads, or both, their raindrop-shaped faces reminiscent of iluminated manuscripts or Persian miniatures, their spears and horses almost cantilevered from the edge of the canvas towards its center.

Or are the halos helmets, turning them into conquistadors spurred on by the promise of gold? The figures, propelled by wings or their horses’ hooves, flit and tumble across rich yellow backgrounds that almost read like their own color-field paintings. Though Martínez León makes ample use of indigo-tinted grays and greens, he mostly uses a warm, cloud- or copper-toned palette which hints at rays of light or the strata of soil–or even precious metals. These glowing-yet-organic colors, combined with coarse brushstrokes that err more on the side of deft confidence rather than bravura mark making, make for works that are both precise and imperfect, luminous and tactile.

The paintings feel almost biblical in both appearance and narrative, and Martínez León openly admits the influence that Byzantine art, or early Christian art made throughout the ancient Byzantine empire, plays in his own studio practice. Though his draftsmanship is too accurate to simplify faces into the piquant-but-rigid features depicted in Byzantine art’s mosaics and altarpieces, he still emulates Byzantine art in another way–not only by deriving inspiration from its gilded backgrounds and the stable geometry of its compositions, but also by adopting its flatness and the qualities of its lines–and interjects those attributes into his own compositions. In short, Martínez León handpicks certain design elements from Byzantine art to inform his own work, rather than copies an entire aesthetic writ large.

Byzantine art often uses curvilinear lines–ranging from gradual arcs to tendril-like curls–to outline its figures, so that silhouettes gracefully encircle stiff, simplified bodies. While Martínez León’s figures are volumetric, with anatomy and shape clearly visible, it’s their garments–not their protruding bodies–that often fragment into flat, jagged patches. Combined with vague backgrounds, these angular abstractions reduce most of the canvas’ surface to a flat, single plane and contrast reverberatingly with his rendered forms, each driving the other to its extreme: flat patches seem more uniform and sharp while the rounded bodies appear more three-dimensional. MartínezLeón’s curving silhouettes come from the figures themselves (their exposed shoulders, wavy hair, locked elbows, contracting wrists, jutting hips), while stiff, simplified shapes abound in the fractals of textile and abstracted patterns framing them.

And, especially when he places a flatly-painted sword indescriptively-painted hands, the forceful vertical line of the blade mirrorsthe upright stance of its holder: a figure converts from saint to sentinel simply by wielding a weapon, transforming into a vigilant guardian along the path that Martínez León and now you, the viewer, traverses. Maybe it’s no coincidence, then, that the Italian word for drawing is disegno, and that disegno doesn’t just translate into drawing or draftsmanship:actually, it translates more into design. And it’s a concept not spoken of enough in contemporary art education: that the design of an artwork–for example, the placement of shapes within its composition, like the strong vertical of a standing figure holding a sword–should be just as considered as an artwork’s technique and process.

While the twelve pieces exhibited in Journey Into the Unseen are paintings, drawing and draftsmanship–both their design and technical execution–form the nucleus of Martínez León’s skills. Not all painters can draw well, but anyone who draws well can paint, and he's no exception. He especially reveals his prioritization of draftsmanship over painterliness in how he tackles edges; he’s more concerned with the value along a form’s edge than the sharpness or softness of the edge itself–a slightly rebellious inclination, given how ardently painters are taught to modulate and blend edges. You especially see this in how deep, dark shadows push right up to the edge of arms, reinforcing the idea of the arm as a cylindrical form. Light wrapping around a cylindrical form doesn’t always reach the form’s far side, creating a shadow along that opposite edge. Martínez León unabashedly, unerringly paints these edge-shadows as raw, inky strips, keeping their uniformity and accuracy of value intact rather than trying to soften their brushstrokes.

Martínez León’s drawing, which is synonymous with painting in JourneyInto the Unseen, is where his work might feel the most contemporary, most current. He doesn’t just achieve this because, from his perch in the present, he can reach back throughout art history and borrow from various methods (for example, he emphasizes the shadow shapes extolled by French Academic drawing, the naturalism and lyricism of Florentine drawing, and the strong plane changes and highlights of seventeenth-century Spanish master, Diego Velázquez). His subjects–the only parts of his paintings that he fully draws and renders–feel contemporary because they’re his contemporaries. The women are denizens of twenty-first century Miami, their skin radiant, their eyes self-aware and intelligent and wan; even the old men, cloaked in astral robes, could be pushing shopping carts around Sedano’s. Each character along his path and anchoring his works exists irrevocably in the time and place of Martínez León’s external surroundings–to which we, too, can travel, if we’re willing to merge onto the Palmetto Expressway.

A young artist grows up in Venezuela in the 1990s, finds his way to Italy, finds his way to Miami.  His passage isn’t just about the education he pursues or the passports he has stamped, but how he processes eacht est and milestone of his own mystical journey–and, luckily for us, he’s left talismans along the way in the form of these twelve paintings. But, though most of his imagery can be universally understood, the message keeps ringing clear:it was Martínez León, and he alone, who first embarked on this strange odyssey, coming face-to-face with the prophets crystallized from both his sketch book pages and all his papaleo.